I finally have the internet in my new house. Just in time to let you in on some good news...

Moving is always stressful. Cleaning, packing, the inevitably unreliable man with a van. But it's also a chance for reflection and renewal. During my organising, I took the opportunity to collate all the things I've written during the two years I've lived at my old house. I got the chance to read through first drafts turned into second drafts, pages of ideas, character names, pictures, maps, several timetables, plot grids, re-worked plot grids, scribbled out plot grids, an intricately devised metric time-keeping system (?). I got to see all the ink and paper that's gone into this hobby of mine.

This here, is the first first page of "Pearl": 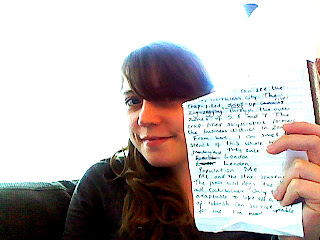 Yup. Somewhere in the last several months this piece of paper turned into my first proper completed novel. I'm not even sure how it happened. But after I'd finished and after several hours of not thinking about writing (and eating cake, and watching The Beatle's Anthology with my friends) I felt a little odd. Because writing (or trying to write a novel at least) has become such an ingrained habit I feel wrong not doing it.

Turns out, that's how I wrote "Pearl" in the first place. I made it a habit. But it wasn't always that way. I often fell short of my daily writing goals, sometimes for weeks on end. I found it hard to stay tied down to one project. I flitted from idea to idea, changing plots, scraping characters, re-building worlds as I went. For a long time, "Pearl" was my secondary project. I didn't even realise she was going to be the idea I put all my effort into until somewhere down the line I found a writing goal that suited me and just stopped flitting.Then I started making progress and the progress became addictive.Watching the word count go up, even when it was by as little as 1,000 words a day, was what spurred me on. And spurred me on all the way to completion.

I don't know what will come after "Pearl". All I can say is watch this space!